By Navin October 05, 2010
Seeing is believing. Millions of people can't be wrong. This Cumbria UFO Video clip accidentally taken by Robert Atkins during his dog walk out is in media and recent. Videos posted were made no sense, just played in the normal speed on Youtube and didn't quite see anything except few nan0-second dots appearing on the screen. Quite frankly, it appeared as a glitch on his camera's lens. I still couldn't figure out and as a result I thought to dissect the video frame by frame in playable format. I used VLC player to play it in 0.06 secs slow motion mode and while doing so, I recorded the playback using other tool. 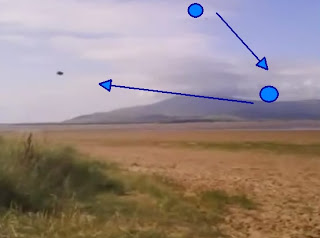 This UFO was traversing in an unimaginable speed. It was doing that in zigzag pattern. While doing so our technology based camera virtually captured it as three UFOs on the screen. Further analyzing, It appeared to be only one UFO at blazing speed, faster than light and zooming in a zigzag course. Those two dimmed objects initially appeared and captured somewhere on the screen were actually the reflection of the UFO traversing along a zigzag path. Our camera couldn't capture such a high speed action rather showed as some blinks of black dots.

Conclusion: We're still petty and insignificant in terms of the technology they're using if it's real. What makes them travel fast? Our physics can't have solid answer yet except some concepts. With that speed, they' could round the planet in a matter of few minutes.