Today, something happened in the sky of New York City, it was orb like glowing objects dancing in the sky or may be some sort of their own cosmic stunt for about an hour and whoever witnessed it, they were speechless. These mysterious unknown objects often termed as UFOs needlessly baffled everyone. Scientists don't readily dive into this kind of phenomenons and government is always at lookout to cover up incidents like this. What to say about our puppet show media. They were biased,they are always and will be always. 95% of their blabbering are all bullshits and whoever listen to those are either numbnuts or on their way to getting brainwashed. The only group that acknowledges this fact are people like you and me. 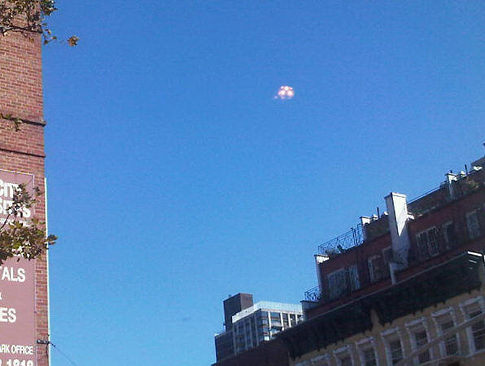 Okay lets begin the analysis on this event. One group stayed firm it's a balloon. It was media and they reported first as UFO sightings. Moment later, something happened inside their cubicles. They changed their casting and they are telling people now it's a balloon. If you are one of those brainwashed by these medias, it's your right to believe whatever they say. Something as small as helium filled balloon flying over 5,000 or 50,000 feet above can't be seen with human eyes. You'll need powerful binoculars or telescope to observe that. These height estimates were made by professionals among us anyway.

And some of the guys, said they're para-gliders in the sky. Para-gliders don't stay put in the sky and they don't glow like a light bulb. I pity on their thinking ability who can't differentiate and figure out even the simple law of physics.

All people on the ground were panicked and to some extent scared speculating if it is some sort of attack after they saw/heard fighter jets fly at blazing speed. Those jets were the proof enough to say those objects were uninvited mysterious one. I don't believe in conspiracy theory and if some of you thinking it's government's some sort of experiment, then enjoy your own realm.

I'm  not here to back up or debunk UFO phenomenon unnecessarily. My  logic is simple. Acceptance. Common people, we're living on very small planet. We've huge infinite ocean of galaxies and stars. Some of the morons think we're are the only one living in this entire universe. How could that be possible? There are definitely other life forms in different ways, more advanced that us or more ancient than us. But definitely there are living forms around the stars. And, we take pride on our just 100 years of technology advancements. Common, it's just 100 years. We're are so immature and so primitive. We can't even destroy the tiniest asteroids with missiles heading towards the Earth. That's how pathetic we are. May be we're the only race who sheds blood of it's own kind. Or may be one day like US secretary of state Hillary Clinton once said "whether we will have to join together as human beings to stave off attacks from aliens in outer space, and then we’ll have to put aside our really petty differences—differences in our own country and differences among people around the world—to stand up for our common humanity..." , we might stand up as one. Back to reality, we are so busy in our own universe that we don't even care what's going on around. And when we see something like that we panic with disbelief.

I don't believe 2012 shit and we human are not in that state to predict cosmic futures. I'm not trying to insult the old prophets or scripts but the real deal is the middlemen who misinterpreted things for their commercial benefits. Just because someone forgot to make calendar for another season doesn't mean it's the end of the world. I'm writing this because I read someones twit about this. They are proclaiming this is the beginning of the end. They are connecting these issues with 2012 end of the world crap. These are the same group of people who believed End of the world back in 80's, then in the millennium and now they are into their next venture. Believe me, they'll never stop and these people are insanely sick people wanting to see the demise of human kind, create fear and tensions.

But,I strongly believe something is definitely happening. It's happening all around the world and we really don't know what's happening. So many people have recorded the exact looking shiny orbs everywhere else too. Similar incidents are happening around the Sun too. Orbs as big as Earth is coming through way in and out the surface of sun like we do in our subways. It's all in NASA's EUVI image database. I'm not trying to conflict the facts and beliefs and don't want to make random display of my thoughts based on assumptions. I can only say, something is definitely happening. Don't know if it's for good or bad.

Folks, my conclusion is those objects were real.

I've my favorite physicist Michio Kaku saying something similar and eye-opening on this matter.