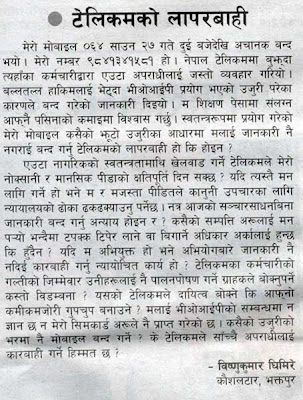 This is the newspaper cuttings of one of our Nepalese Daily Newspaper and here a person is complaining about how his mobile cell phone service is disrupted by Telecom itself without prior notice to him indicating what is his indecent activities. He fumed that at least he would've been informed of his mistakes before cutting his line. He was trying all to sort out hardware problem but later came to know it's the Telecom's act.

He said, he was told that his number was used by Call-bypasser crook using it over VOIP illegal network. He swore he never gave his Simcard to anyone and he has nothing to give and take with such people since he's teacher by profession. He has his own duty to teach his students.
He further wrote there, he's mentally suffered for treating him like a criminal by authority in the Telecom when he went there to make inquiry and register complain.
--------------------------------------

My opinion is at least Telecom should have informed him of his crime. Is the duty of Nation's telecom to act like that? Even criminals are made known of their crimes. Then why is Telecom not letting people know of their crime from whom they charge taxes under various topics? I think this is not the proper way to treat their own customer.

Personally, i hate Nepal Telecom. Those liars always make big announcements and give us nothing but low-standard services.

pradeep said…
Hey,
i too agree with you. Nepal Telecom only being the sole telecom service of the nation is trying to establish its monopoly. Infact its service is being degrading day by day and we customers are not satisfied with nepal telecom is going on with.
August 16, 2007 at 12:29 AM

Navin said…
Pradeep, yeap, when there was no Spice Nepal or UTL, back then it had it's monopoly. But still, if people think NT is convincing than the new competitors in the market, just because it's the country-owned telecom, then i've no words for them. Let them suffer the way they are being treated. After all, one shouldn't ever compare technology with the feelings or loyalty.

I suggest everyone using such services, that please go for the best not for the old or some country-owed crap or bluffers.

Last time, my telephone landline got abrupt out of the blue. I wasn't in a condition to complain them from my landline since it's already dead. So,i dialed 198 for several times from my cell and it was kindda registering complain from there. After 5-6 days they come and repaired the line. If i would've bribed them with 100 Rs, they would've come at the same day. But i thought to wait and it took almost a week.
August 17, 2007 at 2:48 PM