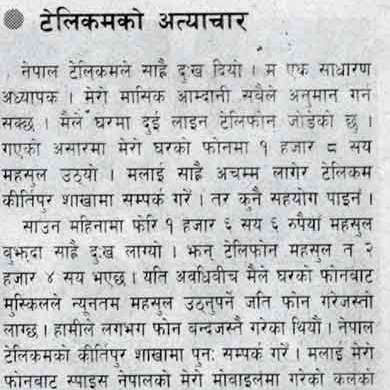 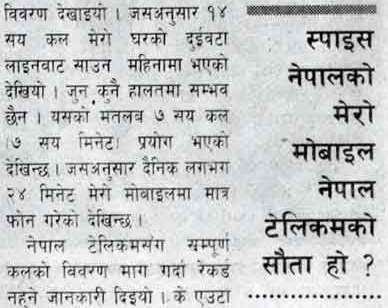 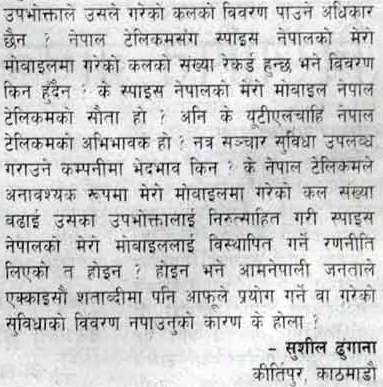 This is a newspaper cutting sliced into three images for better viewing. In this, a guy named Sushil Dhungana feels he's robbed by Nepal Telecom.

His telephone bills showed huge amounts when he had not made any calls. He went to make an inquiry and he found out that his calls were made to Spice Nepal numbers(another Privately own service provider in Nepal competing Nepal Telecom). So, he remained inactive(making no calls) that month.

Following month, he didn't call at all except he was to pay ownership charges only. But to his dismay, the bill was even more than those of previous months records. He was very furious,rushed to telecom office, complained and asked about all the call-logs to get in hand but those Telecom people didn't give him any call-logs saying him, they didn't have it.

He doubts their credibility. If they know where and when and to which number we called, then how come they not know that call-log to provide to it's customer when needed. He thinks surely there is something fishy going on. He felt robbed. Today, SPICE NEPAL pvt Limited is providing very quality and affordable mobile phone services to it's customer than Nepal Telecom. May be it's Nepal Telecom's devious marketing strategy to discourage people to use Spice Nepal's service by letting them pay undue amounts just because they made calls from Nepal Telecom number to Spice Nepal numbers. This is the mere translation of this Nepalese News cutting.

I've found out Nepal Telecom's atrocities before and posted it to my blog at here, here and here too. And, once they plead to help them. I think nobody would be interested to help them. Because they've always looted peoples with unnecessary tax and now there are better service provider than them. Still being nations first Telecom, i expect they really improve unexpectedly. May be one day, i'll be writing in favor of them.

Anonymous said…
this is why ntc closed its paisa transfer service for few days + still some number range are blocked from their money being transfered
Firstly, Have two mobiles with you.
Mobile1 & Mobile2 (say) preferably Nokia mobiles as you can access
contact list in Nokya easily.

Let, Mobile3 ---> the mobile you will be calling to for free.

Firstly, web-sms Mobile3 and tell him only to pick up call from
Mobile1 in the last seconds, say after 6 rings.

Have about 100 rs of balance in Mobile1(though any amount will be
fine, do your basic maths)

After there is a dial tone, in Mobile1 go to contact menu... and dial
to the contact 'A' while the calling tone to Mobile3 is in progress.

Now, 99rs of balance will be transferred to your Mobile2.

Assumption: In this time (after successful balance transfer to
Mobile2) Mobile3 will pick up the call from Mobile1 and have a talk
time of 100 Rs even after his 99 rs has been secured in Mobile2.

Disclamer: I haven't used this trick to my advantage nor i am the
author of this trick.

originally from bipin in nepsecure google group this one trick i did not try but it seems keta haru le babal moz garyo.i don't think this is working any more.but try gardai ma k po janchara try it if you can and tell me if it still is working.
August 31, 2007 at 12:40 PM

Navin said…
oh yeha, i also heard about this. and i felt "KHUCCHING" ha ha ha..

their transfer service was disrupted and i think they've corrected this issue.

and thanks for sharing this nice tips.

i'll definitely let other know who has this NT prepaid card. :)